I can’t be angry at you anymore

Tying myself and my heart in knots

Tripping over my own legs following after you

Has left me feeling discombobulated

We are separated by mindset

I could put your progress in an Easy-bake oven

And you still ain’t rise none

Because your light has dimmed

To a level that only the Atlantic ocean knows

Is my skin color offensive to thee?

I pity those who fail to recognize good company

But as a child it use to get to me

I use to feel upset when a white boy named Nick

Use to call me nigger…

Whenever, I tried to get on the swing

I would yell with glee

While he spouted racist obscenities

The rhetoric his parents taught to him

Was disappointing to me

Why fill a child’s head with prejudice and bigotry?

While I matured, he remains frozen

In the vestiges of playground stories

That I told to my school friends

Where his connection ended with me

Is where my growth began

It takes strength to stand above the ills of man

As a child, I decided not to take

A liar is gonna lie

And a sinner has got to sin

Buy Esha A Cup of Coffee 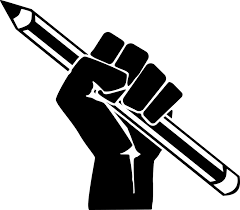 Please support poetry and free expression if you feel moved to. Thank you for reading and supporting. It means the world to me. ❤️